What is Social Alienation 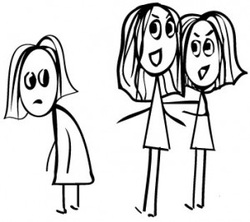 Social Alienation is spreading rumors, publicly humiliating others, gossiping, social rejection, excluding others from a peer group, isolation, or insulting others race or language.  It can happen at school during recess. Alienation can cause someone to commit suicide.  This type of bullying can cause poor body language, low self esteem, and depression.  Social Alienation is more likely to hgappen to girls.  Girls gossip and spread more rumors than guys.  The girls usually say these things to hurt someone.  This can be upsetting to the victim who is usually a girl.  Girls like to exclude a girl/girls from a group because their mad at them or they think its funny.  Guys don't have the emotions girls do, which is why guys like to do direct and physical bullying.
How to stop it-
1.Know that anger and violence is never the answer. If you lose your temper, the bully might tell someone that  you were yelling/cursing or harming the bully in any way. That would get you in trouble. You might not have the courage to say that someone  is bullying you. It's times like that where you would have to stand up and say something.

2. Simply walk away. If you walk away and the bully follows, tell the people around you to join in and have some fun with you. The bully will eventually get bored and walk away. Most bullies like attention, but when they don't get the attention they want, they leave and continuously doing that could stop the bullying all together.

3. You need to confuse the bully. Every time the bully says something, you could start dancing or laughing. Before the bully can say anything you can say a bunch of knock knock jokes and the bully would be so confused that he/she will walk away. Hopefully if you keep doing this, the bullying will stop all together.

4. You should know that this won't last forever. It will stop eventually so you should take it one day at a time. But if      the bullying is starting to effect you in social and physical ways, then tell someone immediately!

5. If it's only certain people who are bullying you, just hang around other people. If these people are bullying you then they must not be real friends. Hang around people who will treat you nicely and respectfully. If the problem gets worse remember to tell an adult right away.
Powered by